A housing complex for senior citizens has beaten off flashier competition to be named “World Building of the Year” at the World Architecture Festival (WAF), which concluded in Amsterdam on Friday.

Considered one of the industry’s top accolades, the award went to Kampung Admiralty in Singapore for its integration of public facilities, community space and over 100 apartments for the elderly. It was chosen from hundreds of shortlisted projects, which included Russia’s World Cup stadium, the Qatar National Library and the UK’s recently redeveloped London Bridge station. 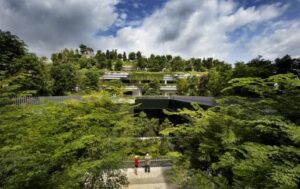 Located in Singapore’s north, the mixed-used development is set across less than a hectare of space. In addition to closed-off residential areas, it offers a pedestrian plaza, a public park and a medical centre equipped to carry out simple day surgery on site. 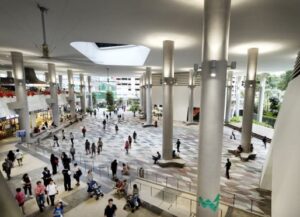 A covered public area in the Kampung Admiralty complex.

The building’s layered design is based on what its designer, local architecture firm WOHA, describes as a “club sandwich” approach: While the structure appears to be an integrated whole, it in fact comprises a collection of different services across its various floors. 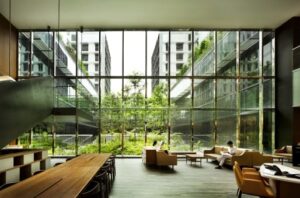 An interior view of the housing development.

Leisure facilities were built in close proximity to the seniors’ residences in order to “support inter-generational bonding and promote active aging,” the designers said in a statement.

“The judges admired the project for the way in which it dealt with the universal condition of longevity and health treatments, social housing provision and commercial space, which enabled substantial public realm benefits,” he said in a statement.

Finch said the project “does something necessary in an intelligent fashion,” before commending its integrated transport links and natural ventilation system. “The jury felt this was a project with potential lessons for cities and countries around the world,” he added.

Kampung Admiralty is the latest in a string of community or public architecture projects to claim the WAF title. Last year, the top prize went to post-earthquake reconstruction project in village in China’s Yunnan province. An extension to the National Museum in Szczecin, Poland, claimed the accolade in 2016.

It’s also the third Singaporean building to win the award in recent years — though it’s the first to be designed by a firm based in the city-state. The Interlace, a stacked apartment complex by OMA and German architect Ole Scheeren, was named building of the year in 2015.

First held in 2008, the World Architecture Festival (WAF) this year recognized more than 30 other buildings in categories spanning residential, commercial and community architecture.