Raising questions of propriety, a Punjab government department reporting to Chief Minister Amarinder Singh has built a check dam that will secure from flooding his personal farmhouse being built at the foothills of Shivalik Hills outside Chandigarh. The dam at Siswan village in SAS Nagar district will divert a seasonal rivulet that would otherwise have flowed into the property bought by Amarinder Singh in January this year.

It has been constructed by the Department of Soil and Water Conservation of the Agriculture Ministry, a portfolio held by the Chief Minister.

The village panchayat, which had not sought such a measure earlier, passed a resolution this year asking the government for a dam while claiming that the water flowing downhill was flooding the fields of farmers.

Construction on the dam began in July, alongside the construction of the farmhouse. And a massive brick and concrete structure with high perimeter walls has come up behind the boundary wall of the Chief Minister’s property measuring 28 bighas and five biswas (around seven acres). 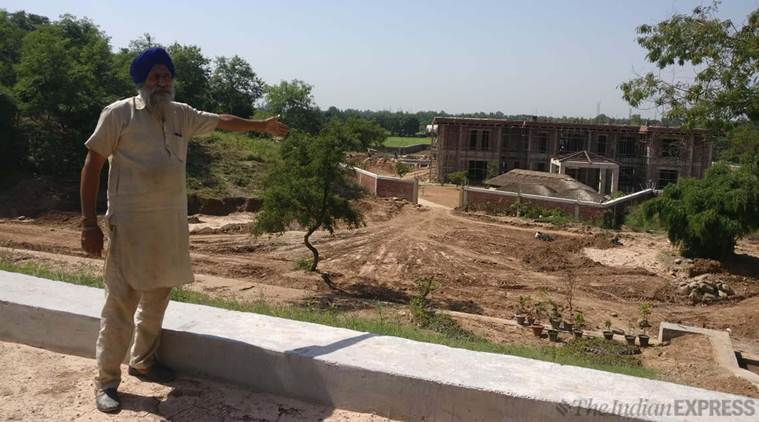 A local farmer. Farmers in the area confirmed that they had not felt the need for such a dam earlier

Responding to a detailed questionnaire sent to the Chief Minister, his media advisor Raveen Thukral dismissed “any conflict of interest”.

“This is not the first such dam is being constructed in the area…the Department of Soil and Water Conservation, Punjab, has constructed many earthen/ stone masonry check dams in District Sahibzada Ajit Singh Nagar in the past 15 years. These dams have been constructed as and when the local villagers have complained that the seasonal rivulets have been flooding their fields, causing soil erosion,” he said. 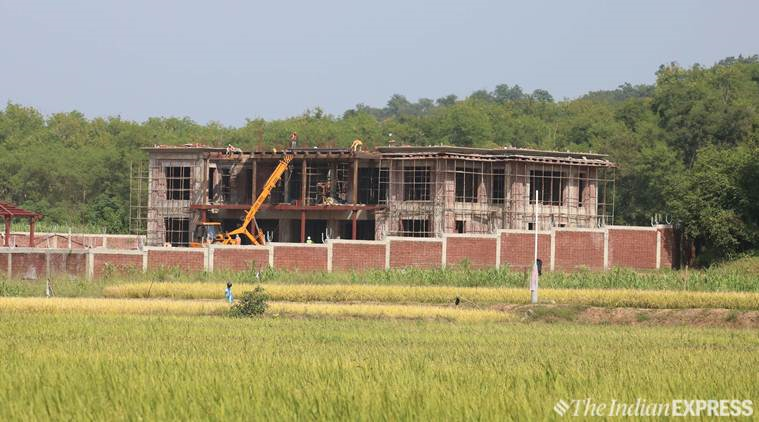 Thukral said that the project was “implemented based on the resolution passed by the Sarpanch of the Panchayat. It was not the Chief Minister’s personal project, and, it is not on his personal land”, he said.

The Soil and Water Conservation department’s records show that the dam is categorised as a “water harvesting/ recharging structure”. Records show that finances for the dam came from a scheme partially funded by NABARD under the Rural Infrastructure Development Fund-17, called “Project for Judicious use of Available Water and Harvesting of Rainwater for Enhancing Irrigation Potential in Punjab State.”

The approved cost was 15,20,800 INR. Final sanction for the project was given in July 2018 but records show that initial movement in this regard began six months before that.

At first, the dam was to be built under the Pradhan Mantri Krishi Sinchayee Yojana (PMKSY). However, letters exchanged within the department on June 26 and 27, 2018, show that officials realised the project could not be undertaken under PMKSY as the area did not fall under the “over-exploited category”, referring to the ground water available.

In the correspondence, officials flagged the urgency to get the project going before the monsoon. Finally, the Chief Conservator of Soils, in a July 13, 2018 letter, approved the project under the NABARD-RIDF-17 scheme.

The project report states the height of the dam is 5.5 m and will enable use of rainwater for irrigation of nearby fields that are otherwise damaged due to the heavy flow in seasonal rivulets during the rainy season.

Farmers in the area, who spoke to The Indian Express on condition of anonymity, said the rain water from the hillocks behind the farmhouse used to spill into the fields through the seasonal rivulet. They confirmed that they had not felt the need for such a dam earlier.

But records related to the dam includes a letter from Amar Singh, Siswan Sarpanch, who cited a resolution passed by the local body.

Dharminder Sharma, Chief Conservator of Soils, said the project commenced before he took charge in July. “We are building such dams all across Punjab, around 150 in number, under the Integrated Watershed Management Programme. The fact that the dam has come up at the same time as the Chief Minister’s house is a coincidence,” he said.

‘Not the CMs personal project’

Responding on behalf of Chief Minister Amarinder Singh, his media advisor Raveen Thukral stated: “It is unfortunate that such insinuations are being made, without any basis whatsoever. This is not the first such dam being constructed in the area. As per information available, the Department of Soil and Water Conservation, Punjab, has constructed many earthen/ stone masonry check Dams in District Sahibzada Ajit Singh Nagar in the past 15 years. These dams has been constructed as and when the local villagers have complained that the seasonal rivulets have been flooding their fields, causing soil erosion.

“In the present case, the dam has been constructed on the request of Panchayat and residents of Siswan village. The Panchayat had submitted a resolution for this purpose, following which the earthen dam was constructed under PMKSY and other intervention polices, on the basis of central Government of India/ State Government guidelines.
“The structure will help in ground water recharge, arresting the soil loss from catchment area and reducing the soil loss in command area.

Less human interference in the forest area and better moisture regime will help in ecological and wildlife development. “The said project was implemented based on the resolution passed by the Sarpanch of the Panchayat. It was not the Chief Minister’s personal project, and, it is not on his personal land. There is a provision of spillway and the overflow water will run through the gair-mumkin choe falling in khasras No. 181 and 201 (as per revenue report) which belongs to Gram Panchayats/Shamlat deh of Siswan village.

“The dam has been constructed under centrally sponsored scheme, PMKSY, and other intervention polices, as already explained above. The Dam has been solely constructed for the purpose of recharging of ground water for the villagers. There is absolutely no ground for presuming that the dam has been built for the Chief Minister’s benefit… “In the past 20 years about 540 such earthen/ stone masonry dams has been constructed by the Department of Soil and Water Conservation, Punjab, under various schemes. This year alone, so far 22 such types of earthen/ stone masonary check dams have been so constructed. In fact, as many as nine earthen dams have been constructed in the adjoining areas in villages Karoran, Chhoti-Badi Nagal, Nadda, Gocher, Pallanpur, Masol, Tarapur, Parch and Jyanti Majri.